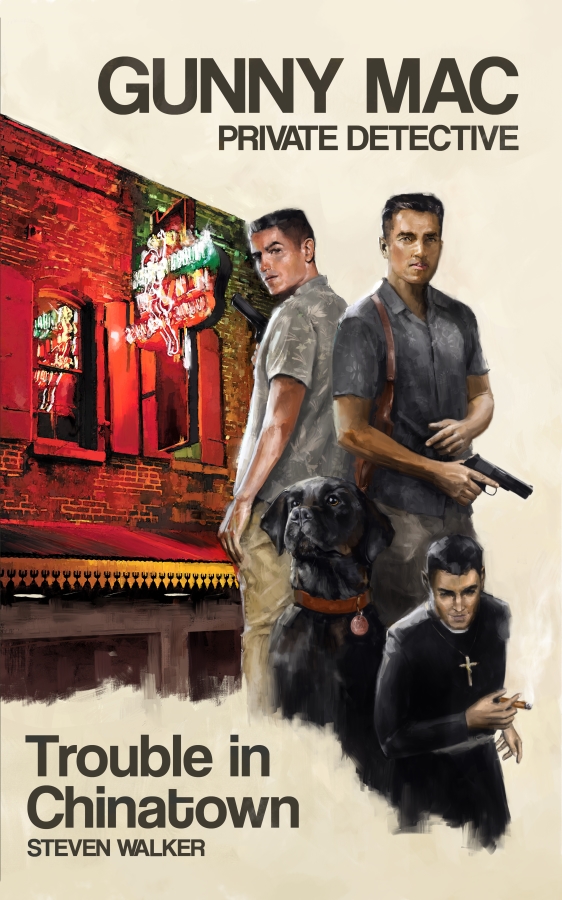 If you liked the movie "Casablanca" or the "Best Years of Our Lives," you will fall in love with this book!

It is 1942, the First Marine Division is fighting for its survival on Guadalcanal. President Roosevelt orders all the money in Hawaii collected, destroyed, and replaced by money with Hawaii written across the back of each bill. Funny money that the Japs can't use if they invade the Hawaiian Islands; if Guadalcanal falls.

Millions of dollars collected and some of the money is about to be taken by anybody who is somebody.

LT. Commander Kincaid, a drunk, thief, and gambler is in charge of destroying the money, has his own plans on what to do with some of the money.

But one man is standing in his way. A bayoneted, shot up Navy Cross winner, hero of Bloody Ridge...a man who hates what he is forced to become...a civilian. Awaiting a medical discharge, Gunny Mac is lost without his Marine Corps. He buys a two- dollar book on how to be a private eye...and Chinatown will never be the same.

But sometimes you have to throw the book away...

But he's not alone. His fellow wounded Marines, at the naval hospital, now out of the fight, have lots of fight left in them.

Mac's best friend, Gunny Wojohowitz, needs Mac to help him track down the one man he needs to kill...

LT. Burke a Naval officer...a wealthy, spoiled Harvard graduate who is sent to the Marines as an Artillery Forward Observer as punishment, seeks forgiveness and redemption and drags Mac deeper into the corruption of Chinatown.

They shed their blood and their human psyche, but they face one more battle for their country, and for their friends. One last battle...one last victory!

"...a twisty turny, shocking journey that is guaranteed to keep you hooked until the very end!"
— Aimee Ann, Red Headed Book Lover

"Fast paced action novel with strong characters and a believable plot including some surprising but real historical info. [...] Couldn't stop reading until the end! Can't wait till the next one!"
— Jan, Goodreads Reviewer 5-Star Review

"This is a captivating novel…Gunny Mac Private Detective…I would say if you are bored with the same old books then take a chance with this gem because you wil not be disappointed. It has everything you want in a great story, and that is spine-tingling good content, dynamic, memorable characters, and a brilliant author. Gunny Mac Private Detective gets five stars from me, book lovers!" — Aimme C

"This is a great beach read and one fun novel..just enough violence…just enough romance and characters you will never forget. Padre McCaffery is my favorite and he will be yours too. The plot will keep you praying the good guys will win."
— Susan C

"I thought my fraternity brothers were close… nothing like these beat-up wounded marines and sailors with no experience as detectives take on the whole world. A fun filled ride you won’t forget."
— Ben H.

"I served with Steve Walker and his story rings with authenticity because he knows what it means to serve as a grunt and only those feelings he portrays in his characters can come from real life. A great novel you won’t be able to put down."
— Lt Col Roger F.

"As a graduate of Notre Dame I finally get to read about a Jesuit priest who is a genuine hero, the padre of a Marine Battalion, and one character you will never forget…he is a funny, cigar smoking, whiskey drinking hellion who will fight and die for his Marines. A man who shows the world how to be a man and a priest, and at the same time show his undying love for his God!"
— Ted D.